The hidden cost of cheap clothing

Viscose is often seen as a sustainable fabric – it uses less water than cotton and is biodegradable, in contrast with oil-based fabrics. Yet manufacturing viscose requires hazardous chemicals. If released into the environment they can have disastrous consequences for people’s health, including chronic mental and physical disorders and even premature death.

Since June 2017, Greenhouse has worked with UK-based NGO Changing Markets Foundation to expose the true cost of irresponsible viscose manufacturing in several plants across Asia. Last year we helped launch the NGO’s inaugural Dirty Fashion report, which looked at the environmental impacts of a number of viscose producers.

Our work on this report resulted in high profile coverage in The Guardian, The Independent, HuffPost and BBC Radio 4’s flagship consumer affairs programme You and Yours. This publicity very likely contributed to several viscose manufacturers’ recent commitments to clean up their production processes.

However, there have been no such commitments from Aditya Birla Group, the world’s biggest viscose manufacturer and a self-proclaimed leader in sustainability. The $50 billion conglomerate continues to deny any responsibility for the pollution and disease in the area surrounding its plants, despite substantial evidence to the contrary.

In response to Aditya Birla’s denial, Changing Markets sent investigators to check whether the situation had changed at two of the company’s factories, in Madhya Pradesh, India, and West Java, Indonesia. The investigators’ report shows strong evidence that Aditya Birla is releasing toxic pollution, harming the health of those living near its factories. 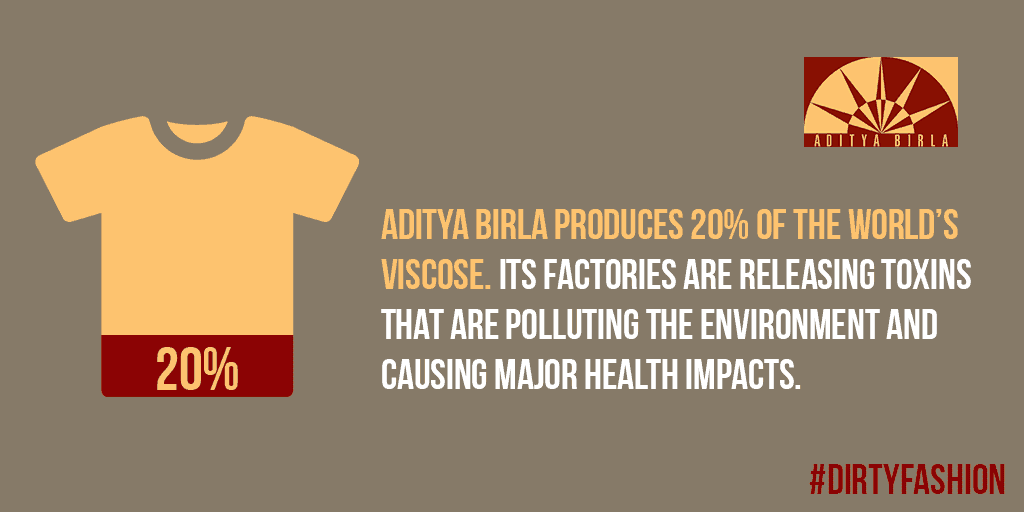 In the case of the Indian plant, conditions had actually worsened since the initial investigation, with strong-smelling pollution staining the river dark red. Locals blame the pollution for two deaths and a spate of illness which left many of them unable to walk. The air outside the factory was found to contain levels of dangerous carbon disulphide 125 times higher than World Health Organization guidelines. This may be contributing to serious health conditions observed in the area, including cancer, tuberculosis, reproductive problems, birth defects and stomach disorders. At the Indonesian plant, investigators saw evidence of illegal levels of toxic waste released into rivers where children swim.

Changing Markets Foundation asked Greenhouse to help them publicise the Dirty Fashion results, to raise awareness and effect change throughout the viscose supply chain, from manufacturers such as Aditya Birla to the high street brands that are buying from their polluting factories.

Coverage achieved to date includes hard hitting features in the Daily Mail and The Independent as well as articles in leading trade titles Eco-Textile News, Just-Style and Retail Gazette.

On Twitter, Greenhouse helped to create a buzz around the report, bringing to life the story of the campaign through infographics and GIFs over the #DirtyFashion hashtag. Key influencers shared our content including Safia Minney, Mike Barry and Ethical Consumer.

As a result of the campaign, H&M, Tesco, ASOS, M&S and Zara have all committed to incorporating Changing Market’s recommendations within their sourcing policies, which includes mapping their full supply chain and ensuring regular environmental health checks.

A spokesperson for H&M said: “We fully agree with Changing Markets on what actions need to be taken within the viscose production process.”

ASOS said: “We’re committed to addressing the issue with our sustainable sourcing and environmental policies and by engaging with our suppliers to transition to closed-loop production.”

We believe cleaning up viscose pollution is incredibly important. It is the third most used fibre in clothing, and use is projected to increase rapidly. As it is made from wood fibre, it is biodegradable, leading some to call it the ‘fibre of the future’.

But if viscose is to be part of a sustainable future, retailers, governments and major industry players such as Aditya Birla must change. To find out more, read the report here: Roadmap towards responsible viscose and modal fibre manufacturing.

To read more about our previous Dirty Fashion campaign with Changing Markets click here. If you’re an NGO campaigning for positive change and need help to tell your story and amplify your reach, get in touch with us. 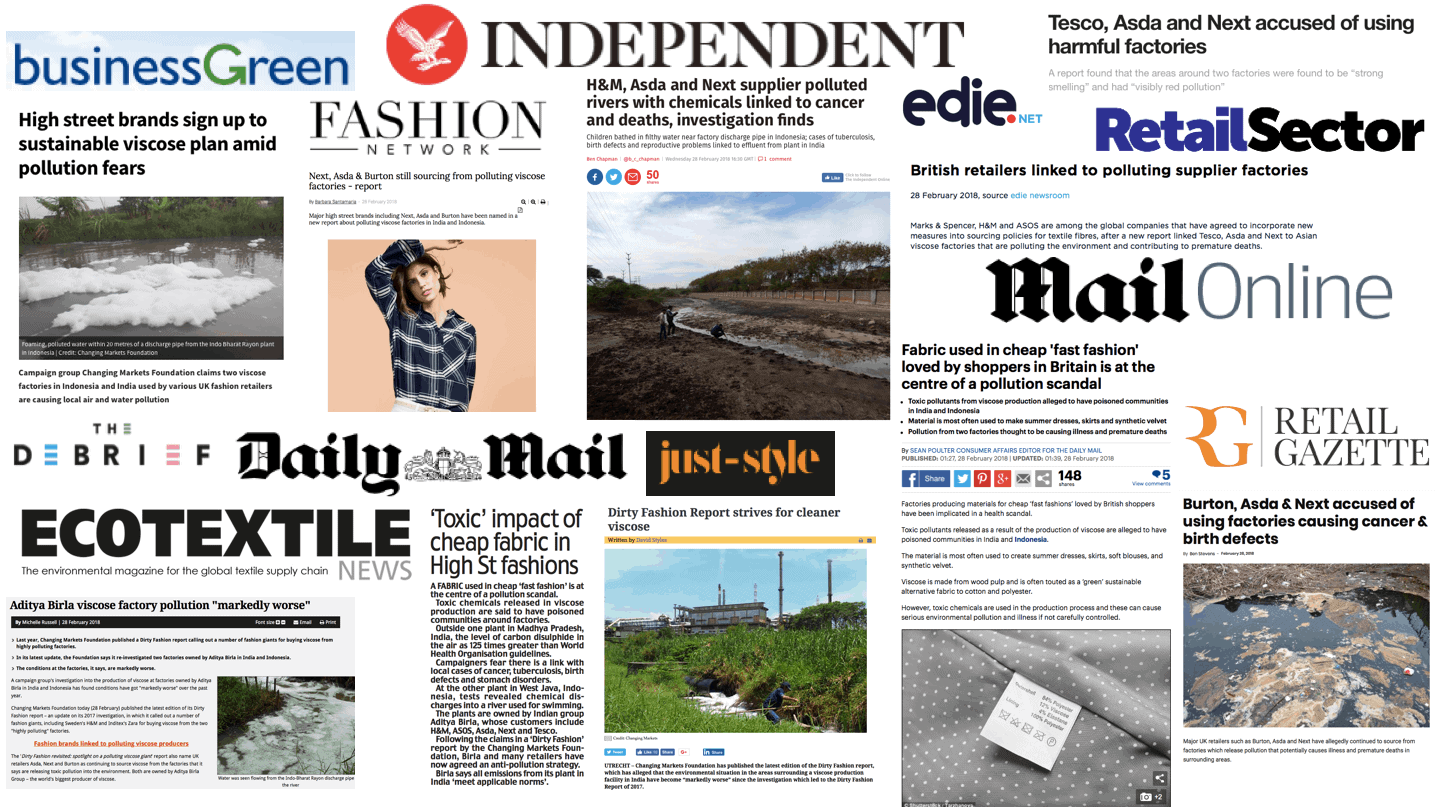